How did we decide on our name?

In some ways the decision for our name was simple, in other ways it was a multi step process. Jeff and I had tossed around several ideas for a name in 2017. Some were 'way out there', others were way too long and serious. We spoke to a few fellow breeders along the way who offered some suggestions but nothing really sealed the deal. Then one of our mentors, Leah Troisi of Taipan Palace suggested 'ranch' because of our location in the country. It seemed fitting. Of course we wanted the NIXON in there somewhere because we are darn proud of what we have accomplished so far, and what we have set out for goals for our breeding program. We also needed something about our amazing dogs, after all they are the center of everything we do. So... we filled out the forms with the CKC and off they went to hopefully be approved. Of course everything worth ANYTHING takes a while.....and a while more! While we waited I just happened to goggle 'Wrinkle Ranch'. I was stunned at what I found. Who new it was a term used for a seniors swingers club! I went into panic! After yet another contact was made with the CKC I found out that indeed our Kennel/ Breeding Program name had already been approved and we would be recieving the paperwork shortly. And what do you know.... 4 days later I opened the mail to find the offical papers to say that we were now, "Nixon Wrinkle Ranch".

So please know, we are not a swingers club, nor are we attached or share any interest in any other Wrinkle Ranch Kennels, Breeding Clubs, or SWINGERS CLUBS! 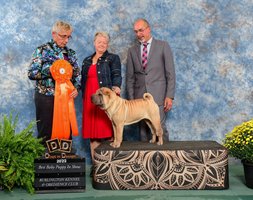